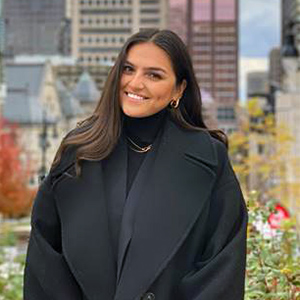 Nelia graduated from Havergal College in Toronto with distinction in 2019.During her years at Havergal, Nelia collaborated with students to co-found the Resist, Insist, Persist Committee, wherein she promoted voicing opinions in the face of controversy and instilled a sense of peer support in her community through organizing events that raised awareness for social issues related to gender equality.

Currently, Nelia is pursuing a Honours Bachelor of Arts focusing on Gender, Sexuality, Feminist, and Social Justice (GSFS), and a double minor in Political Science and French Language at McGill University in Montreal. At McGill, Nelia is the President of Her Campus McGill, an online magazine targeted at female students; Vice President of Internal Affairs of the McGill Pre-Law Students Society, a student society dedicated to helping students who are interested in the field of law; Vice President of Media and Design of HeForShe McGill, a solidarity movement for the advancement of gender equality, initiated by the United Nations; and Co-Vice President of Marketing for McGill Women in Leadership, a student-run organization dedicated to empowering and promoting female-leaders. After completing her Bachelor’s degree, Nelia’s goal is to attend law school, and consequently, practice law.

She is thrilled and honoured to be a part of Yara Leadership Society because she recognizes the importance of supporting and empowering Iranian women who have made an impact in some way through their careers or their leadership, as well as the importance of preserving her Iranian roots through finding a sense of belonging within an Iranian-Canadian community.